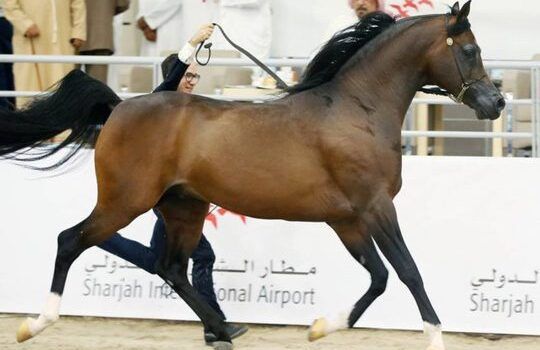 The UAE’s affinity with the Arabian horse reaches back thousands of years, yet today these roots are not forgotten. In fact, the nation’s passion for breeding, showing and riding Arabian horses continues to grow year on year.

And, while endurance might be considered the UAE’s national sport, pure-bred Arabian showing has a significant following and continues to develop and grow with considerable encouragement and investment from the nation’s leaders. It was only 30-years ago, in 1990 that the UAE produced its first WAHO (World Arabian Horse Organisation) stud book with 315 horses registered, yet by 2019 this number was well over 20,000 with 1000-plus foals born each year.

Ties with the Arabian flow deep in the UAE, in fact Sheikh Zayed bin Sultan Al Nahyan himself said of the Arabian horse, “Proud, independent and generous like its desert master, as sturdy and adventurous as the spirit of the land, the Arabian horse can truly conquer the imagination. As we enter a new millennium, it warms my heart to see the progeny of the mythical horse of Baz spread across the globe and to witness the ever increasing interest shown internationally in this superb animal whose beauty and spirit can once again be seen to grace it’s homeland”.

The COVID pandemic might have put a halt to ring-side spectators during the 2020/21 Arabian showing season, yet events continued. This season however, promises to be even bigger and better, with two brand new events and six glittering international competitions.

The Emirates Arabian Horse Society (EAHS) has announced the 2021/22 season will run from the 14th October 2021 to 25th March 2022, with 13 individual championships, the most the UAE has ever hosted.

The 18th Sharjah Arabian Horse Festival for national competitors will take place from November 4th to 6th of November, then events move to Kalba in the Eastern Region, where the 3rd Sharjah–Kalba Arabian Showing Festival also for locally bred horses will run from November 18th to 20th.

December sees events move to Fujairah for the Fujairah Arabian Horse Championships held from the 15th of December to the 18th.

February will see competitors fly in from around the globe for the Abu Dhabi International Arabian Horse Championships (10th to 12th February) and the first edition of the New Emirates International Show (24th to 26th February).

The Emirates Arabian Horse Breeders Championship for private studs (21st to 23rd March) is surely the highlight of the season for our UAE breeders. Last year prize money at the event reached AED four million with 18 specific prizes for Emirati owners to encourage their participation.

And the 2021/22 showing season will end with the very first edition of the Arab Breeders Championship on the 23rd and 24th March.

Equitrans has worked within the Arabian Showing industry for almost 20 years, transporting and shipping horses around the globe. With extensive experience in moving breeding horses, (mares with foals-at-foot, colts and stallions), the team ensures the highest possible care and attention is given to each of these incredible animals, guaranteeing they arrive safely and in top-condition for both showing and breeding.

If you would like more information on our Equitrans service for showing Arabians, please contact: +971 56 887 4418.
For the full EAHS calendar, news and stud book information visit: here